Tales of a Kingfisher 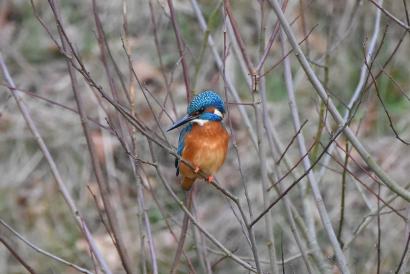 On 4th November I was at Loxwood taking wildlife photos.

I met a volunteer outside the Canal Centre. We saw a Kingfisher fly past, it landed in a bush on the opposite bank of the canal. Before I had a chance to take a photo it flew off.

I walked along the towpath towards Southland Lock. I met a group of walkers, they mentioned that they had just seen a Kingfisher.

I returned to the Canal Centre. Whilst chatting to another volunteer, we saw a Kingfisher land in a bush opposite us. I raised my camera to take a photo, but no luck as it flew off down the canal.

I walked to Baldwin’s Knob Lock and then returned to the Canal Centre. I offered to help two volunteers unload their cars. I put the camera away in my car and helped the volunteers unload. Just after we finished I watched a Kingfisher land in the bush on the far bank of the canal. It then dived into the water, caught a fish and flew off with it down the canal. It was a joy to watch but also frustrating for me as my camera was in the car.

Oh well, there is always another day to take a Kingfisher photo.

Here is a Kingfisher photo that I took a few years ago.