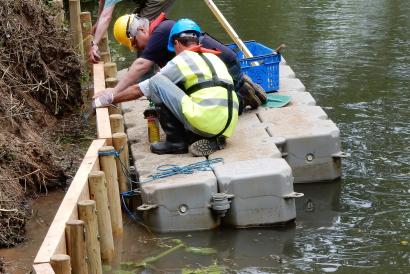 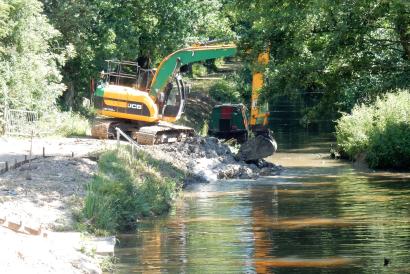 Our Northern Working Party were on site over the weekend of 9 -12 June when 21 volunteers (spread over the four days) set about installing the bank protection over three separate lengths of Cranleigh Waters. The logistics for the event were difficult. With no secure site compound to deliver materials to, all the specialist materials (coir rolls and mats, gabion wire etc) had to be left at elsewhere and Dave Evans had to build an artificial pond to keep them from  perishing before arrival at Shalford.

Then on the first day, about half the materials plus the Trust's dumper, small excavator and log trailer had to be transported to Hunt Park - not to mention the aquadocks and shower caravan! On arrival, a further 30 tons of gabion stone and 20 tons of top soil had to be moved so it was not surprising therefore that we probably spent about 1½ days out of the four moving materials and kit back and forth, thus reducing our ability to complete the ambitious task list. There were two types of bank protection to install. One section involved driving a parallel row of short timber poles into the edge of the river, wiring them up and placing coir rolls on top. The bank was then protected with matting. There were problems with this as the poles disappeared very fast down into the alluvial river bed. So an amendment to the scheme had to be devised. The solution was to re-profile the bank using the excavator so that the piles had something firmer into which they could be driven. The change in plan was successful and we managed to complete the section by the end of day 2, although without the layer of top soil under the mat which was detailed on some plans but not ours (helpfully!).

The second and longest part involved a curving length of the river bank further south (close to the viewing platform) with a much higher bank. Here we had to drive longer poles into the river edge using the aquadocks to position them and the digger to push them in. Thick oak timber wailings were then screwed to the poles using timber coach bolts. Behind the wailings, gabion wire mesh was attached and filled with stone to hold it down against the poles. Coir rolls (with ready planted water based plants) were then placed on top of the wailings with top soil behind. This took us until mid Monday morning to complete. It was only half the job as a second upper level row of the protection is required along the top, close to the park footpath, which is what all this is designed to protect.

Section 3 is a short 9m section adjacent to the small footbridge. Our attempts to drive the timber posts as per section 2 were thwarted by the presence of underwater rocks and we abandoned any further work pending a reconsideration of the design.  Another weekend is needed to finish the task along with a re-design of section 3.