The Birtley Bridge 2 project has been moving on apace as volunteers begin to construct the temporary bridleway and footpath needed before work on the lift bridge itself can begin.

The Birtley section of canal, near Bramley in the Northern end of the canal, was purchased thanks to the generosity of an overseas member and the first bridge (Bridge 1) is already in place, but with a temporary fixed deck. The plan is to add a lift mechanism and build Birtley Bridge 2.

One of the most critical operations on the project has been to re-route a medium pressure gas main that runs along the existing causeway where Birtley Bridge 2 will be located. Volunteers have had to find the exact location of the existing main and then dig the trench for the diverted gas main so SGN can divert the pipe.

In a first for the Wey & Arun Canal Trust a water-inflated dam usually used to protect against flooding was put to use to hold back the canal and allow excavation of the trench needed for the new pipe. AquaDam Europe’s mobile flood barriers have often been used to protect against floods and storm surges but are now being adopted by canal trusts as a fast method of creating a protective barrier during construction work.

Volunteers positioned the sausage-shaped device on the towpath in its rolled up state and filled it by pumping in water, causing the dam to roll out and push across the canal.

While the SpeedyDam did the trick, when excavations began volunteers encountered running ground water coming from the base of the West bank and so had to hire in and install metal trench boxes to restrain the unstable earth while they worked.

This was successful and SGN were able to lay the diverted gas main across the width of the canal. We are now waiting for the company to return and complete the connections at each end of the new gas main.

Meanwhile, working party members have made as much progress as they can on the temporary bridleway and footpath, surfacing with type 1 aggregate and installing gabion cages to support the canal wall and bank.

Once SGN have finished their work on the gas main the temporary bridleway can be completed and excavations on the bridge foundations can begin. 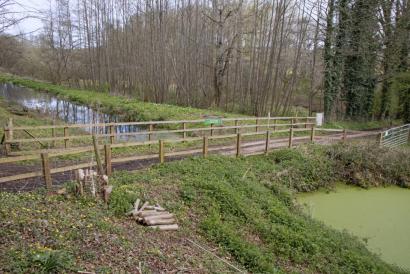 The causeway that will be replaced with Birtley Bridge number 2. 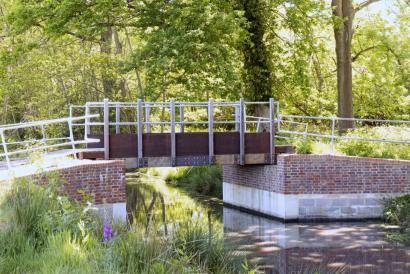 Birtley Bridge 1 needs a lift mechanism to replace the temporary deck added at the beginning of the year. 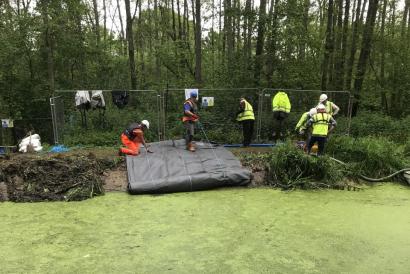 The SpeedyDam being rolled out ready to be pumped with water. 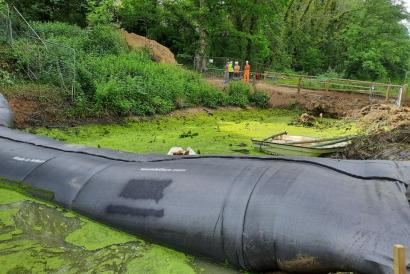 The SpeedyDam in place. It will be used for future projects on the canal when its work here is done. 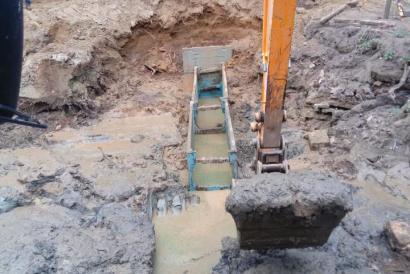 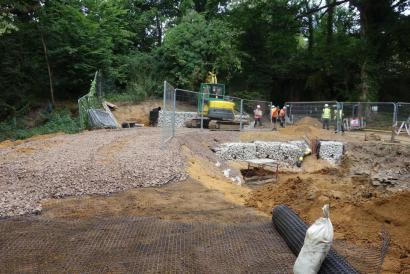