A day of two halves

A Kestrel in an Oak tree. 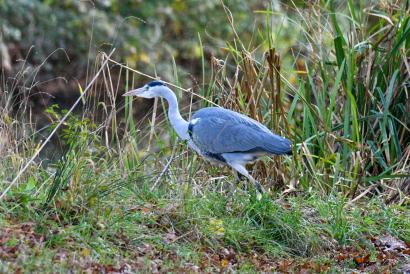 A Grey Heron at the edge of the canal towpath patiently waiting for fish. 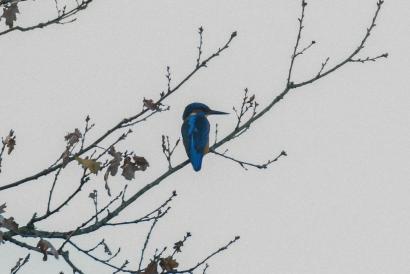 I went for a walk along the canal on 9th December. During the morning I met a friend walking towards to me above Devil's Hole Lock. He mentioned that he had seen a Grey Heron below Southland Lock. I continued my walk and slowly approached where my friend had seen the Grey Heron. Then all of sudden it flew out the reeds in front of me. It was too quick for me to take a photo.

I walked back to Loxwood feeling disappointed that I did not take a photo of the Heron. I then sat down to eat my lunch. A Kestrel landed in an Oak tree opposite me and I was able to take several photos.

After finishing my lunch I walked towards Brewhurst. Just after I went through the gate at Brewhurst Bridge I spotted a Grey Heron at the edge of the canal towpath patiently waiting for fish. I was able to take a few photos before it saw me. It then took off, but landed again further along the towpath, I was able to take more photos. This was repeated a couple of more times.

Feeling pleased that I had managed to take photos of a Kestrel and a Grey Heron I started to walk back. As I was walking I thought to myself I have been lucky twice and wouldn't it be nice to be lucky a third time and see a Kingfisher. I could not believe my luck. As I walked past Brewhurst Lock a Kingfisher flew past me and landed in a distant tree alongside the towpath. I slowly approached the Kingfisher taking photos as I got closer. The light was not good for photography but I was pleased that I was able to take a photo of the Kingfisher.

A few days earlier on the 30th November I also took a Kingfisher photo at Brewhurst Lock. Again the photo was taken at a distance in poor light.

Sometimes there is luck involved with wildlife photography. It is often about being in the right place at the right time.