Desilting at the Summit 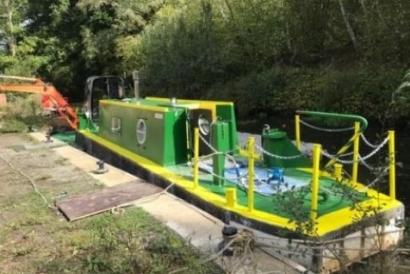 Volunteer Charlie Coxwell describes the process of desilting the canal at the Summit Level.

The canal alongside Dunsfold aerodrome on Dunsfold Park in Surrey had become very silted and in places the silt was above the water level. Historically, the canal had been seen as a convenient place to dump large concrete lumps and soil waste, and several large trees had fallen across the canal that needed to be removed safely.

The easiest way to clear such an area is usually via a long reach excavator, operating from the towpath. However, the canal is lined with many mature trees and the very limited working space prohibited such action. Hence the Trust purchased, from Land & Water Services Ltd, Pauline the 19-tonne dredger. Pauline was originally built in the 1960s and Land & Water had given her a considerable upgrade in 2003. Alongside the dredger the Trust bought two barges and a tugboat.

When Pauline was launched into the summit section in February 2019, via a 250-tonne crane at Compasses Bridge, her first task was to dig her way to the Thriscutt Slipway and the winding hole at Dunsfold Road. As the canal was so silted there was no room for the spoil barges to be used for spoil removal, so the spoil was piled on the adjacent towpath according to environmental guidelines. In May 2019 we arrived at the slipway.

Once at the slipway volunteer Andy Evans spent much time working on the ‘business’ end of Pauline, improving her running and better adapting her to our use. Brian Morgan and myself set to sorting out the welfare cabin where the wooden interior showed signs of rot. We removed her ballast and worked on the internal rust from her steel hull. She was then given a repaint, the ballast replaced and her welfare cabin refurbished.

Clearance work started again in early January 2020, and yet again we were forced to use the towpath to pile spoil. With the aid of several Dredging Team members, Pauline was kept working for five days a week, throughout January, February and March. Teams worked in twos for safety – one drives, while the other waits for their turn – but also because after 45-60 minutes of concentrated work a break is needed.

As with many other working parties, Covid halted all work in late March 2020. On returning from lockdown the opportunity was taken to paint the external cabin and deck area. Now almost complete, cabin hatches have now been modified with a view of keeping the rain from entering! So far it looks as if we have been successful.

We are hopeful that sufficient spoil has been removed to enable the spoil barges to be used alongside the dredger when dredging is again permitted to continue. Canal depth now mostly varies between 1 to 2 feet, so spoil removal barges will initially only be partly filled. It is anticipated that several passes will be required before full clearance is achieved.

The barges will be emptied at the Thriscutt slipway, with the nutrient-rich spoil being placed somewhere on the business park subject to agreement with Dunsfold Park for future use in landscaping.