GET SOME GLIMPSES OF CANAL HISTORY 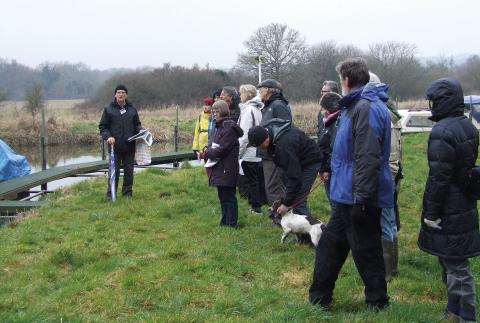 HISTORIC locations on the Wey & Arun Canal route will be explored during guided walks over the Heritage Open Days weekend in September.

Members of the public can join strolls along sections of the waterway which were alongside the Guildford to Horsham railway line.
The first walk is on Saturday, September 9th, meeting at 2.15pm in the car park of Shamley Green Church, Church Hill, Shamley Green GU4 0UD.
Trust technical liaison officer Alan Johnson will take people on a four-mile circular route to visit four sites containing relics of the canal and the railway, including three iron-framed bridges.
On Sunday, September 10th, walkers will meet at 2.30pm at the Gunpowder Store at Stonebridge Wharf, on the River Wey at Shalford. With trust publicity officer Rob Searle, they will explore the canal route down to the former Bramley Wharf, off Station Road in Bramley.
The Gunpowder Store held the products of Chilworth Gunpowder Mills before they were sent off by barge to London via the rivers Wey and Thames and to the South Coast on the Wey & Arun Canal.
A 1½ mile stroll of approximately two hours will take in the Tannery Lane roving bridge and the sites of the Tannery Lane Lock and the unique Gosden Aqueduct. Parking for walkers is available at Broadford Business Park, Shalford GU4 8EP, behind the Parrot Inn on the A248.
Trust chairman Sally Schupke commented: “People will be able to hear about what we are doing to restore the canal’s northern section, particularly our plans to re-create the canal between Shalford and Bramley.
“It’s also an opportunity to experience the lovely countryside on the canal route, where we are also focusing on enhancing the environment for wildlife.”
Most of the walk routes are not on metalled surfaces, so it will be essential to wear walking boots, stout shoes or trainers.
The events are free, but donations to the trust will be welcome. Booking is essential, at https://weyarun.org.uk/events  by e-mail to events@weyandarun.co.uk or by calling 01483 505566, by September 8.
Date:
Thursday, August 17, 2017