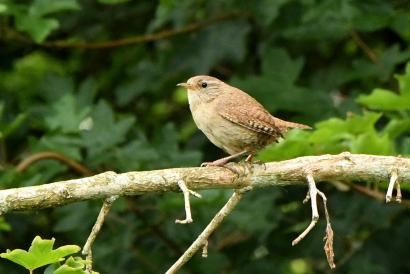 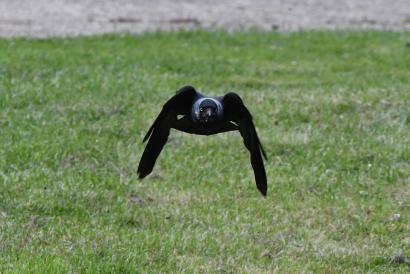 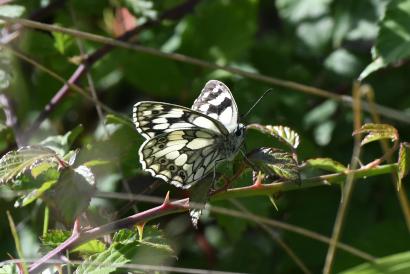 In early June I visited Drungewick. I saw several different species of butterflies, damselflies and dragonflies. Between the bridge and lock I saw a beautiful Wren. It played hide and seek in the bushes before briefly appearing on a branch (see photo). On the other side of Drungewick Bridge near the slipway I watched a Jackdaw for several minutes. It then took off and flew straight towards me. I was able to take this head-on photo.

One morning in June at Brewhurst Lock, I saw quite a few white butterflies. When I got nearer, I was pleasantly surprised to see that they were Marbled Whites. There were about a dozen fluttering around my feet. They were in pristine condition, so they must have emerged earlier that morning. (see photo). I also saw a Large Skipper and several Gatekeeper and Meadow Brown butterflies. Further on at Brewhurst Bridge, there were quite a few Banded demoiselles and Red-eyed damselflies.

In July at Bonfire Hanger, I saw some Comma and several Silver-washed Fritillary butterflies (see photo). Nearer to Gennets I saw an Emperor dragonfly oivipositing (egg laying). There were several other different species of dragonfly at Gennets Bridge Lock.

When I visited Devil’s Hole Lock in May, it was nice to see a Mallard Duck with several ducklings. A couple months later it was good to see Mum duck and three youngsters that were almost fully grown.

Towards the end of July, I walked down Harsfold Lane and then to Orfold and Lordings Locks. There were some nice Banded demoiselles at Orfold. At Lordings Lock, another pleasant surprise, when I saw my first ever Brown Hairstreak butterfly (see photo). As I arrived at the Lock, I saw a Green Woodpecker at the waterwheel. Unfortunately it also saw me and flew away before I had a chance to take a photo. I spent a while at Lordings watching the butterflies, damselflies and dragonflies. I also saw a Grey Wagtail on the Lock wall. I then walked to Haybarn, I saw several different butterflies and also a Treecreeper on the opposite bank of the canal.