Wey & Arun Canal Trust members gathered ahead of the Autumn Meeting on Saturday for the unveiling of the latest addition to the fleet: a Mk III Wheelyboat.

The boat was officially named the Walter Grove at a special ceremony in Loxwood on Saturday 23rd October and given the traditional spray of fizz to welcome the 17.5ft long wheelchair-accessible boat to the canal. The purchase of the secondhand boat was made possible by a generous donation from supporter Peter Grove and has been named in memory of his grandfather, who was a master carpenter on the Wey Navigation from 1885 to 1930. Peter, who now lives in the US, was represented by his cousin Ian Hairs, from Alfold, who christened the boat on his behalf.

Up to seven passengers or five wheelchair users can be accommodated in comfort onboard the Walter Grove. It is light enough to be transported by the Trust’s own equipment and will be ideal for use on the Summit Level, near Cranleigh and Dunsfold, where there are no canal locks. Chairman Sally Schupke said: “Over the next few years it is clear that we will be offering boat trips in different parts of the canal. The versatility that this boat offers is something we were looking for.”

The boat was supplied and refurbished by The Wheelyboat Trust, a national charity dedicated to getting thousands of wheelchair users out enjoying the UK’s inland waterways. The Wheelyboat Trust Director Andy Beadsley said: “We hope lots of wheelchair users in Surrey and beyond will be able to enjoy life on the canal as much as their able-bodied counterparts, thanks to the new Wheelyboat.”

Seating and bimini canopy and electric outboard, battery and charger for the Wheelyboat have been generously provided by the Ernest Kleinwort Charitable Trust and Henry Smith Charity respectively. It is hoped to offer boat trips in 2022 once skipper training has been completed. 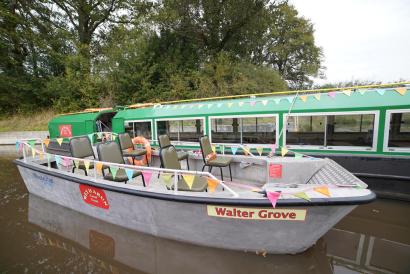 The Walter Grove can be used on different parts of the canal as it is light enough to be moved by the Trust's own equipment. Photo by Stephen Batey. 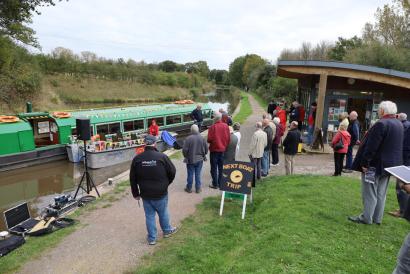 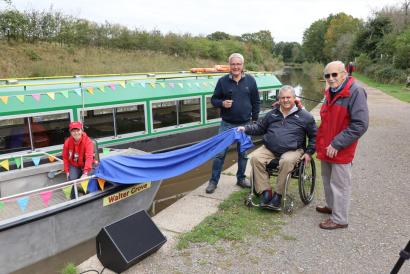 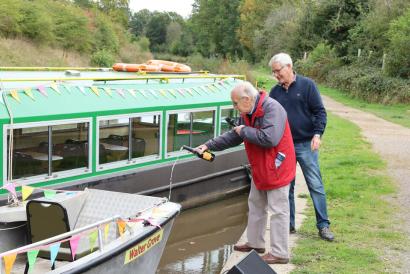 Ian Hairs does the honours on behalf of his cousin Peter Grove, who provided the funds to purchase the secondhand Wheelyboat.

The Wheelyboat adds another option for boat trips. Photo by Sue Batey.