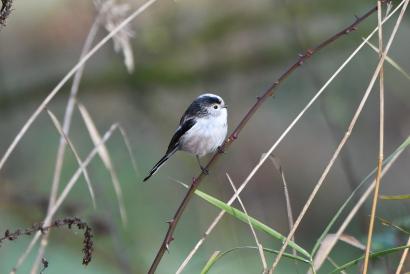 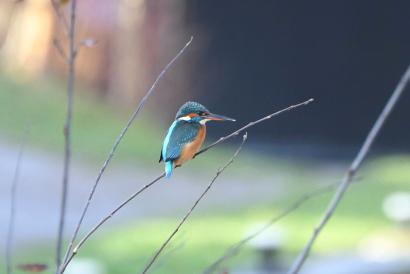 I regularly volunteer at Loxwood Canal Centre. I usually arrive early to provide an opportunity to take wildlife photos.

Walking  towards Brewhurst Lock, I often see a Robin which seems to follow me, perhaps it is hoping that I am going to give it some food. Also Blue Tits in the trees between the towpath and car park. At the Lock I stop for a few minutes, on several occasions I have seen a Great Spotted Woodpecker in the trees.

Kingfishers are regularly seen. Most people only usually see a flash of Blue and Orange as it flies past just above the water.  On one day during December I saw a Kingfisher fly past me and over Brewhurst Lock. So I walked back towards the Canal Centre hoping to see it. But it saw me first and flew from a tree and landed on the top of some distant reeds. I slowly approached, taking photos. As I got nearer the Kingfisher again saw me and flew away. Just one of my photos was reasonably good enough to upload to the wildlife page on the Trust’s website. (see photo)

When I am volunteering in the Canal Centre I often look out of the windows or go outside to see what wildlife is around. During November I saw a Grey Heron land on the bank near the winding hole. For several minutes it stood motionless watching for fish. But it only managed to catch a very small one. I then watched it walk along the bank and the wharf before returning past the winding hole and flying off towards Brewhurst Lock. (see photo)

Last winter I saw a Fieldfare in the crab apple tree at the entrance to the car park. During December I was pleased to see it again in the same tree. (see photo)