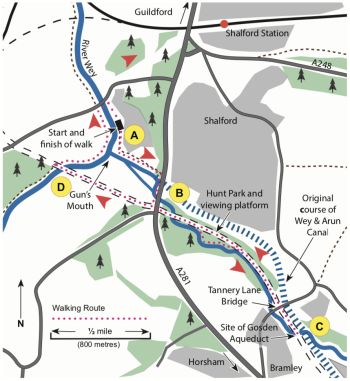 The starting point is the Gunpowder Store at Stonebridge Wharf (A), near the junction of the River Wey and the Wey & Arun Canal. Stonebridge Wharf was an important loading point for river and canal cargo, especially gunpowder from Chilworth (about 2 miles to the east). Nowadays you reach the wharf through Broadford Business Park; the entrance is by the Parrot Inn on Broadford Road (A248).Go through the Business Park entrance, turn right to the river and you will find the Gunpowder Store on your left.

To start the walk, turn left from the Gunpowder Store (assuming you are facing the river) and follow the path that leads away from the river to the old Wharf Cottages. Take the small path to the left of the cottages. Through the trees to the right you will see moored boats. These boats are on the first 400 yards of the Wey & Arun Canal, now owned by the National Trust. On the opposite side of the canal is Gun’s Mouth Island which is leased by the Wey & Arun Canal Trust. Just before you reach the A281 Horsham Road (B), look to your right and you may be able to spot the original canal bridge (Stonebridge) – the bridge arch was blocked up when the road was raised and straightened in the early 1970s; this was after floods had caused serious damage in 1968.

At the main road turn right; you are now crossing the route of the Wey & Arun Canal. After about 100 yards you cross a new bridge across the Cranleigh Waters; the previous bridge was destroyed by the 1968 floods. As you cross the bridge, look to your right for a good view of Gun’s Mouth Island. Carefully cross the road to find the Horsham-Guildford railway which closed in 1965 and is now in use as a footpath and cycle path for most of its length.

Follow the route of the old railway for about 100 yards to cross a bridge over the Cranleigh Waters. Immediately after the bridge, go down the ramp on the right to follow the riverside path created by Wey & Arun Canal Trust volunteers in 2013. You are now in the Hunt Nature Park which is being developed by the Canal Trust in memory of Ed & Doris Hunt who lived in Loxwood, Sussex. Follow the riverside path past the viewing platform built by the Canal Trust in 2015; the oak trees on the opposite bank of the river are estimated to be more than 500 years old. When the riverside path rejoins the railway route, turn right (watch out for speeding cyclists) to reach Tannery Lane Bridge. The original Wey & Arun Canal bridge was built between 1813 and 1816. When the Horsham-Guildford railway was built in the early 1860s, the road level was raised to cross both the canal and the railway. This fortunately preserved the canal bridge intact.

Continue on the old railway line for about 200 yards until the path turns sharply left; the old railway bridge here was dismantled after the line was closed and the path now crosses Gosden Aqueduct on the route of the Wey & Arun Canal. The aqueduct was built between 1813 and 1816 to a design by Josias Jessop; there were two similar aqueducts on the Sussex part of the canal route. You can inspect the left-hand side of the aqueduct by turning left and going down to the river bank. Next to the aqueduct was a lock (Tanyard Lock) – it was largely dismantled after the canal closed in the 1870s but the Canal Trust uncovered some remains during an archaeological dig in 2014.

Walk back along the railway path to the A281. Horsham Road. Carefully cross the road and continue along the route of the old railway to cross a bridge over the River Wey (E). Immediately after the bridge (installed in 2006), go down the steps to the River Wey towpath. Turn left on the towpath to walk past the The Gun’s Mouth (the start of the Wey & Arun Canal) and the Gunpowder Store. At Broadford Road, carefully cross the bridge to follow the opposite bank back to the Gunpowder Store and the end of the walk.