Achievements galore in 2021 despite the pandemic

2021 certainly posed its challenges, but volunteers’ enthusiasm for restoring the Wey & Arun Canal never wavered and the past 12 months saw more of the canal route come under Trust ownership and further planning applications for major projects submitted, bringing restoration ever closer.

The focus on the northern section continued, following the planning application made in 2020 which would re-establish the link with the national waterways system at Shalford, near Guildford. 2021 saw the opening of a new Information Point and boardwalk close to the junction of the canal with the River Wey, in the Hunt Nature Park (owned and managed by the Canal Trust). The timber building, built by volunteers and contractors, will be a focal point for visitors and will host educational visits and guided walks.

Further south, at Bramley, the Trust almost doubled the length of canal in its ownership thanks to two separate land acquisitions. It now owns about 1.8km of the canal route in the Birtley and Rooks Hill/Fanesbridge areas and submitted two planning applications to extend the restored section south of Birtley Bridge 1 constructed in 2019. The plans include a restored lock and a brick-faced bridleway overbridge.

At the tail end of the year volunteers installed a temporary fixed deck to Birtley Bridge 1, creating a scenic 1km circular walk, and work on a second bridge here is expected to begin in 2022.

Land was also secured at the southern end of the canal at Northlands, just north of the A272 at Newbridge. The Trust purchased 830m of canal here which is usually in water.

As well as looking to the future, volunteers made great progress on current restoration projects and maintenance jobs across the length of the canal, from fixing leaks along the canal at Drungewick to repairing Pallingham Bridge in the South, and keeping towpaths clear for the many walkers, cyclists and horseriders who flocked to use them last year.

On the Summit Level, at Tickners Heath in Alfold, working parties made headway in the major project that will allow the canal to cross the busy Alfold-Dunsfold road. A new canal route with new road and pedestrian bridges is being created.

Over the past year volunteers and contractors completed the piling for both bridges and installed the footbridge, as well as beginning excavation of the new canal route. Work on a road diversion has now begun, ahead of construction of the road bridge itself.

Despite the pandemic, volunteers managed to run boat trips on the Loxwood section for much of the year, with Cream Tea and Santa Cruises a sellout. The Trust also added another boat to its fleet, a Wheelyboat Mk III, which was officially named the Walter Grove at a special ceremony in October. The 17.5ft long wheelchair-accessible boat will be used for small groups on various parts of the canal.

2022 promises to be another year of action for volunteers, all working to ensure more parts of the canal are opened up for the enjoyment of the public. If you are not a member, why not make it your resolution to support the Trust? Just click here for more information. 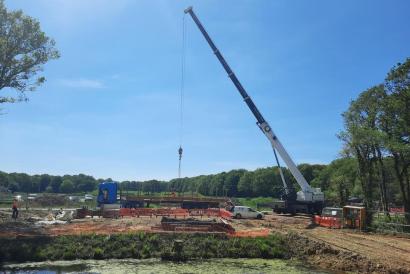 The arrival of the prefabricated footbridge at Tickners Heath was one of the highlights of 2021. 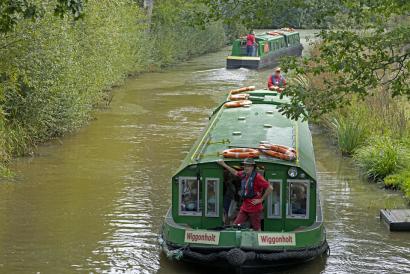 It was a busy season for the boat group, despite the pandemic. 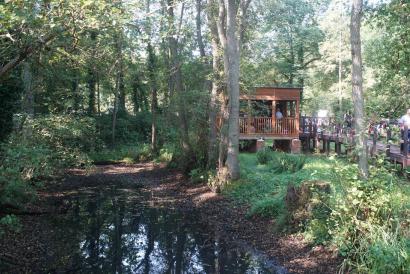 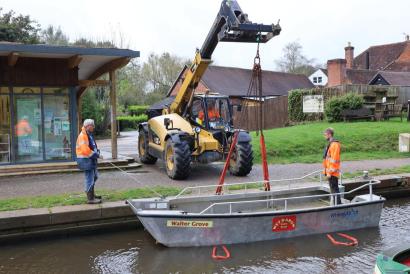 The Walter Grove Wheelyboat joined the fleet in 2021. 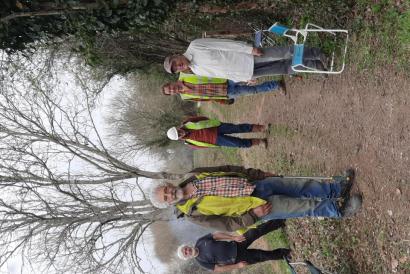 Working parties ensured the canal was maintained as high numbers of visitors enjoyed the towpaths.