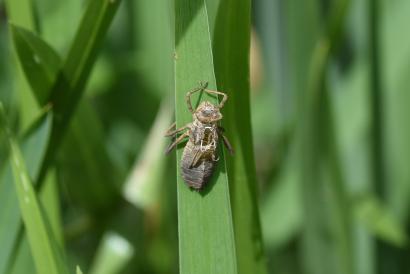 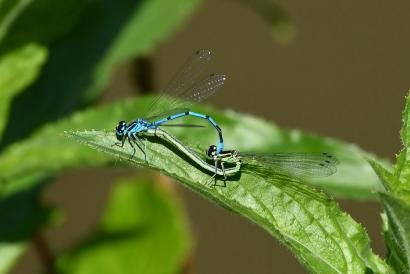 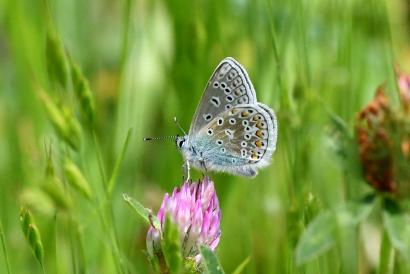 On 11th May I saw several different species of damselflies at Drungewick. There were large Reds, Azures, Blue-tailed and Red-eyed. I also a Mute Swan.

Further along the canal near Devil’s Hole Lock, I saw more Azures and Large Red damselflies. I also saw a dragonfly Exuvia. Dragonfly Nymphs climb from the water, often using the reeds. They then emerge and leave behind the Exuvia (see photo). I also a Mallard with her ducklings.

On 15th May I saw a male Beautiful Demoiselle at Brewhurst Lock.

On 17th May there were a large number Red-eyed damselflies at Brewhurst Bridge.

On 26th May, I had a nice walk from Newbridge to Loves Bridge. There were a large number of Azure damselflies between Newbridge and Northlands Bridge. I also saw several Large Red damselflies and Banded demoiselles. Nearby on the river Arun, I saw a Mute Swan.

At Rowner Lock, I saw a male Common Blue butterfly (see photo). I was pleased to see a male Emperor dragonfly (see photo). There were also several Hairy dragonflies at Rowner. In the water below the lock, there were hundreds of tadpoles.

On my return walk, I saw several Speckled Wood butterflies. I found a Drinker moth caterpillar on the towpath (see photo). I also saw a flash of blue and orange as a Kingfisher flew past near Northlands Bridge.