A BRIEF HISTORY OF THE CANAL 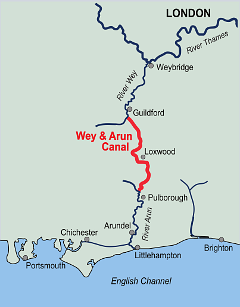 In the 19th century it was possible to travel by boat from London to Littlehampton on the south coast of England via Weybridge, Guildford, Pulborough and Arundel. This was just part of a once-extensive system of inland waterways covering England and Wales.
The route was via the rivers Wey and Arun, linked between Shalford in Surrey, andPallingham in Sussex, by the 23-mile Wey and Arun Canal.
Although only one part of an extensive system, the Wey and Arun Canal formed a vital link, the only one between the south coast and the Thames, linking London and the busy river Thames with the English Channel - and beyond.

River Arun, c1900.
The river Wey was made navigable from Weybridge to Guildford in 1653, and extended to Godalming 90 years later. The Arun has existed as a tidal navigation as far inland as Pallingham Quay, near Pulborough, since 1575.
What is known today as the 'Wey & Arun Canal' actually consists of two canals. The first was the Arun Navigation, which gave trading vessels from the south coast access to Newbridge Wharf near Billingshurst and was opened in 1787.

Then in 1813 an Act of Parliament, backed by the 3rd Earl of Egremont of Petworth House, authorised the building of a further canal, the Wey and Arun Junction Canal which extended the navigation from Newbridge up to Stonebridge Wharf south of Guildford on the Godalming portion of the river Wey.
Following the Industrial Revolution, commercial trade on the canal gradually increased, with 23,000 tons carried at its peak in 1839. However, the railways were becoming established as the new form of transport.

Horsham station, c1865
The first railways in Sussex had little impact on the canal, but in 1865 the line between Guildford and Horsham opened in direct competition with the canal.

Although carrying charges were cheaper, the canal could not compete with the railway for speed and convenience. By 1868 canal traffic had virtually ceased, and in 1871 this caused an Act of Abandonment to be passed.

Summit pound near Dunsfold
By this time parts of the canal were almost derelict although occasional traffic carried on after official closure.

Further south, the Arun Navigation managed to survive until the start of the 20th century before it too succumbed.

On abandonment the canal was sold off, mostly to the estates from which the land had been originally taken, but in many cases there is no record of resale. 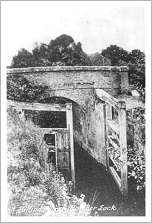 Although neglected, in the few places where it meandered close to civilisation it was still regarded as a feature of local interest. Rowner Lock near Billingshurst is shown on local postcards in the early 1900s despite having been disused for over 30 years.

For most of its length, however, the canal remained no more than a stagnant, muddy overgrown depression in the ground.
And so it remained for almost a century, unloved and largely forgotten. Until 1970 when a group of enthusiasts formed the Wey & Arun Canal Society and which later became the Wey & Arun Canal Trust.